It can be hard to wake up early in the morning, especially during the colder periods of the year. The yoga technique including https://www.julianalucky.com/post/10-top-yoga-books-for-kids offers a suitable remedy that will quickly help you get out of an inert state. Especially if you plan to practice meditation. This is Kapalabhati – “cleansing the skull” – such is the classic translation from Sanskrit. The ancient language has many meanings, and the alternative would be ‘radiance’, ‘perception’, ‘knowledge’. It follows that technology helps to clarify our consciousness and awaken it to the knowledge of the inner world. 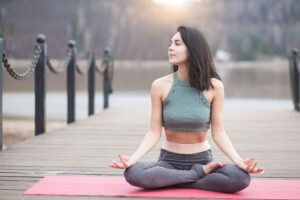 Traditionally, Kapalabhati is considered a shatkarma — a purifying action, as stated in the classic Hatha Yoga Pradipika and Gheranda Samhita: “Breathe in and out quickly like (blacksmith’s) bellows. This is called kapalabhati and it destroys all mucus disorders. ”
At the level of the subtle body, Kapalabhati clears the energy channels that pass in the head area.
At the level of the physical body, it serves to cleanse the airways, nose, frontal and maxillary sinuses.
Studies show that through indirect brain massage, Kapalabhati has a beneficial effect on the pineal gland, which is responsible for the production of melatonin, a hormone that regulates the processes of awakening / falling asleep and aging.

Technique advantages:
1. Stimulation of the sympathetic part of the nervous system, which leads to an increase in the general tone of the body.
2. Activation of blood circulation and cerebrospinal fluid circulation in the brain area due to indirect massage.
3. Improving blood flow in the respiratory tract, in the abdominal organs, in the cardiovascular system.
4. Training of the intercostal muscles, which leads to an increase in the volume of the lungs and their ventilation.
5. Warming up the body.
6. Increase concentration of attention.
7. Adaptation to stress.
8. Regulation of the flow of energy.

In yoga therapy, Kapalabhati is used as a means for the prevention of diseases of the respiratory system and disorders of the regulation of venous outflow in the cranial cavity.
It is recommended to closely monitor your well-being during practice, as excessive exertion can lead to dizziness and increased intracranial pressure.